Temples valley
All the places

At the bottom of this town there were two rivers that history has put in millions of books: the  Akragas and the Hypsas that, joining themselves in the valley of San Leone (where there was once an emporium for citizens), flow into the nearby African sea.

In these rivers were supposedly many crabs and they impressed the settlers so much that the crab was adopted as a symbol of the town (you can see it engraved in many Akray’s coins).

All was perfect in the ancient Akray !

The stunning archealogical park, has the following attractions: (temples are of the Doric order and the entrances, as usual, face the Greek mainland, east):

Attention: the Valley of Temples has two entrances. One at the bottom (west) and one on top (east). We assume entry in the east, close to the Temple of Juno. 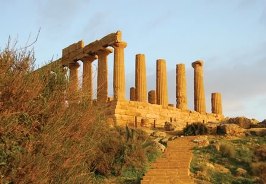 Temple of Juno (photo) from the 5th century BC with 30 columns still well preserved. It occupies the highest part of the acropolis and bears the marks of (some stones are “stained” red) of a very, very dramatic fire. It was probably that, the work of the Carthaginians, which destroyed the city in 406 BC. Approaching the temple is a votive altar, where religious sacrifices were consummated. Remember that the faithful could not enter and therefore the purely religious functions took place outside

You walk among the almond and old olive trees, with a wild Sicily that explodes into color: of flowers and horizons.

As you go down, on your left, is a vast, early Christian necropolis, while at the bottom, you begin to see the shape of the Temple of Concordia peeping out. 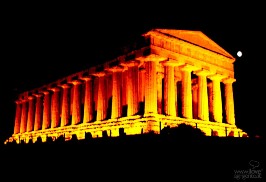 Temple of Concordia (photo ) the symbol of the valley with its grandeur and perfection. Also from the 5th century BC, almost 14 meters high and consists of 6 columns on the short side and 13 on the long side. It is one of the best preserved Greek temples in the world thanks to its transformation into a Christian Church in the 6th century AC. There aren’t words to describe the magnificence. It is a work that is seen and admired.

Almost in front of the Temple of Concordia, a little street takes you, after a fifteen minute walk into the countryside, to the monumental Hellenistic-Roman area (photo).

Here we see part of the settlement. One is usually speechless roaming around these building ruins that clearly give to us the ancient wealth of  Akray. One sees splendid mosaics and towering columns of peristyle houses (with an open internal courtyard). The vision of this area leaves you awestruck just by the majesty and in terms of the size of the ruins.

Returning to the Temple of Concordia and living a look towards the nearby cemetery (Grotto Frangipane, the most important catacomb complex in Agrigento) you go down to get to the Temple of Hercules.

Temple of Hercules of which 8 columns remain. His cult was among the most fervent of its time. This is probably the oldest of the temples (520 BC). Also here, a sacrificial altar is alongside the temple. 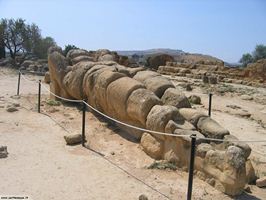 Temple of Zeus built to celebrate the victory over the Carthaginians in the Battle of Himera (480 BC). It was among the biggest temples of ancient times (measuring 112.7 m x 56.3) and today it is reduced to ruin. It had 7 x 14 half columns! The main characteristic of this temple was the presence of the Telamoni (photo), enormous sculptures seven and a half meters high, depictions of Atlas holding up at once the sky and the beams. You can look at one of these stone giants just close to the temple. Behind this temple, in a populated area, is a sacred area that has remains of a temple from the 6th century BC.

Among the almond and olive trees, and accompanied by the ubiquitous green prickly pear, you arrive at the western most part of the hill where you find the ruins of the Porta V, one of many entry gates into the city.

Shrines of the Chthonic Deities: past the ruins of Gate V, west of the sanctuary of Zeus, comes another sacred area where there are a number of sacred buildings dedicated to Demeter and Core, chthonic deities, protectors of agriculture and therefore fertility. The open-air enclosures of this sacred area provoke the visitor to imagine these religious festivals of the past, with animal sacrifices and the ancient Siceliotis (Greeks of Sicily) with the arms to the sky as a sign of invocation 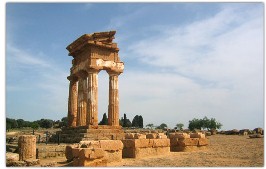 Temple of Dioscuri (Castor and Pollux) (photo ), of which there are 4 columns supporting a portion of the entablature. The corner of the temple has a beautiful rosette. It is close to the sanctuary of the chthonic gods.

Garden of Kolymbetra: Among the temples of Dioscuri and Vulcan is the garden of Kolimbetra, corner of Paradise in Paradise, one might say. Here is a large depression in the ground where it had a swimming pool, as stated by Diodorus.  It was a huge cistern that supplied water to this fertile valley. In this charming place now you can walk through paths of broom, myrtle, and the inevitabile smells of Sicilian citurs fruits. We can see several acquaducts through which water flore to the great “pool” of Akragas.
A little further and continuing along the path of this visit, is another temple.
Tempio di Vulcano: not just another god, but the god of fire, Hephaestus, had a sumptuous temple here (43×20.85 m) columns with 6 x 13. Today there are only a few ruins.

Returning to the main road it is possible to visit the spectacular Archaeological Museum, a stunning beauty. On the outside of it other buildings of the ancient Akray, as the eccelsiasterion, the bouleterion and the Oratorio of Phalaris.

It takes two days inside the park to visit it perfectly, even though it is all in the same area.

One other note: Empedolce and Pirandello were both born here.
A seed of poetry seems to be there. Maybe the same seed that made the magnificent almond trees in this beautiful area