Ruins and landscape.
All the places

Reaching Adranon from the forest of Santa Maria del Bosco 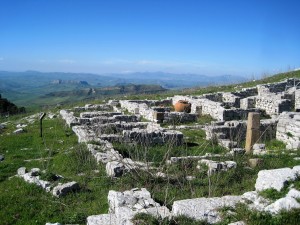 On the top of Mount Adranone, at 1000 meters above sea level, there are ruins of the Siceliota Adranon discovered by the Selinuntines of the 6th century BC, was then destroyed and rebuilt by the Carthaginians.The site, that extends to the perimeter of beyond 6 kilometers, is in a beautiful landscape position that has impressive walls. In some spots they are preserved as high as six meters in height. Originally built in the 6th century BC, they have had enhancements over the  many centuries. 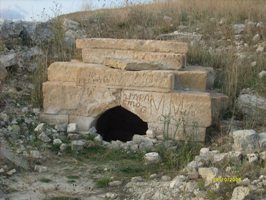 The vast area that, needless to say has yielded many relics, has within its perimeter a series of ruins of dwellings, shops and sacred areas… At the top of the mount is, as usual, the acropolis of Adranon..

Outside of the wall, is the necropolis representing various eras: among these the monumental “Tomba della Regina” (photo) and a farm of the 4th century BC.

The archeological excavations reveal that there must have been a violent battle here and probable destruction of the city somewhere in the middle of the 3rd century BC (Punic wars??)

map
Il monte è un massiccio carbonatico formatosi per la lenta sovrapposizione di sedimenti fossili su fondali marini antichissimi risalenti al Trias superiore (per intenderci, al tempo dei dinosauri) e...
map
Housed inside the archaeological area of the same name, it preserves the finds of the homonymous Greek-Punic site (IV-V century BC) of Monte Adranone, including a series of prestigious bronze belts...
map
In a landscape with a very high bucolic profile, one of the most excellent in Sicily, here is this particularly suggestive karst cave, right under the plateau of Entella, seat of the ancient city of...
This site uses cookies. By continuing to browse the site, you are agreeing to our use of cookies.
Ok Find out more