Timpa of Acireale (Natural Reserve)
All the places 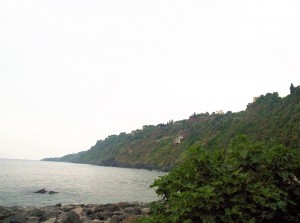 A vast promontory created by repeated volcanic eruptions in various time periods, that fall to the Ionian Sea with steep, vertical walls.  La Timpa is in good part inaccessable and impervious. From the village of Santa Maria la Scala it is possible, right at the end of the delicious lungomare (heading south), to enter the two foot paths most characteristic of the Timpa.

During the migratory season, with good binoculars, you can see herons and large birds of prey.

map
Roman Baths of Santa Venera At these beautiful Roman baths it is easy to reconstruct the path to wellness made by these ancient Sicilian in the first century AD. Characteristic vaulted ceilings are...
map
Near the fishing village of Acitrezza, about 200 meters from the shore, there are these spectacular rocks (Islands of the Cyclops) that legend has it were the put there...
map
Nella stessa area ricadono questi due piccoli musei. Siamo attorno alle pendici di un vulcano spento, il monte Serra. Il museo della lava è un centro espositivo permanente sul vulcanesimo e sulle...