Roman Baths of Santa Venera
All the places 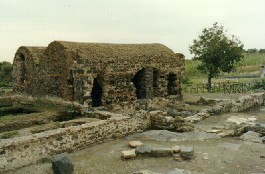 At these beautiful Roman baths it is easy to reconstruct the path to wellness made by these ancient Sicilian in the first century AD.

Characteristic vaulted ceilings are still visible today,  In fact, one can see the locker room, frigidarium, tepidarium and the calidarium as well. All of it is built of lava stone mixed with clay bricks.

Next to the baths one can also see the rest of the small temple (probably dedicated to Venera) and a pool.
An area was discovered some one hundred meters north that was probably inhabited or was at least an industrial zone during the Greco-roman period.

map
Near the fishing village of Acitrezza, about 200 meters from the shore, there are these spectacular rocks (Islands of the Cyclops) that legend has it were the put there...
map
Eight lava caves, almost in the center of town, itself in a lava field.  In length they reach about 1.5 kilometers. Today inhabited by bats, in the past the housed people...
map
A vast promontory created by repeated volcanic eruptions in various time periods, that fall to the Ionian Sea with steep, vertical walls.  La Timpa is in good part inaccessable and impervious. From...