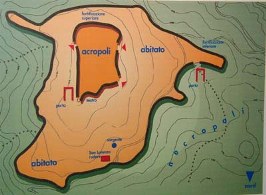 The ancient city of Hyppana, the “mountain of horses”, seems to have been right on this site, on the top of mount San Lorenzo at 1007 meters in altitude.

It is in an optimal strategic position with two rivers downstream, at times navigable. The river San Leonardo flowed in the northern Mediterranean where there had been Solunto and Himera, the river Sosio flowed in the southern Mediterranean where there had been Eraclea, Agrigento and Selinunte.
The archeological excavations have unearthed almost nothing of the remains of this ancient city.

There was even a theater in this town that appears to have been prosperous and powerful until the 3rd century BC.

The cemetery was located on the western side from which, among other things, gave access to the city (inaccessibile to the east which was defende by towering walls).

Archeological research has so far addressed only the fortifications and the acropolis. 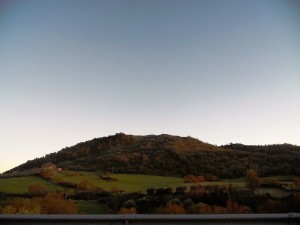 More specifically, regarding the fortifications, there are two individual walls, one back (southwest) along the outside perimeter of the city, the other up front (south) built to crown the plains of the acropolis.

In the opposite corner, which is northeast, are the remains of a control tower sitting on the northern slope of the mountain and defending a small access road (behind) the acropolis.

On the acropolis also, the remains of some buildings have been identified, of which Building B, a probable sacred destination, is located immediately behind the wall almost at the top of the mountain.

The other excavated buildings are located almost in the center of the vast plateau of the acropolis. Of these, and of particular importance, is a circular building..

The findings of Hyppana are beautiful and among the most exalted. They include many ancient coins, typical of the Hellenistic period from Syracuse, Agrigento, and even Campania; Hellenistic pottery painted black, and a silver-gilt plate, embossed, and depicting a two-faced deity, probably belonging to a ritual dagger.

Several museums, including one of the adjacent Prizzi, retain the exhibits.