Greek Theatre of Taormina
All the places

Behind the city walls of Taormina is what many consider to be the most beautiful Greek Theater in the world.  With the unparalleled views of the countryside, it certainly earns that designation. In fact, the whole complex of ruins is perched on the edge of the azure blue sea with imperious Mount Etna lurking, maybe protecting from above. Visitors from as early as 250 BC have enjoyed this amazing feast for the eyes and today we are transported back in time. 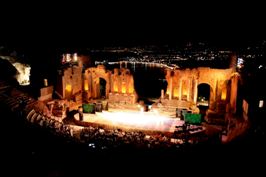 Construction probably began in the 3rd century BC.  One can still see Greek inscriptions on the limestone seats as well as sketches made by slaves. Under Roman rule, the theater was expanded and gladiator combat was substituted for Greek drama. The new construction consisted of an auditorium with nine steps, on top of which were niches made of granite. There were splendid corinthian columns in front and three open doorways behind, next to the niches in a semicircle. Then, like today, the extraordinary beauty of the panorama was framed by the magnificence of Etna and the deep blue Ionian Sea. It was and still is simply breathtaking.
In the summer one can see a wide variety of performances in the theater, and the recommendation is: don’t miss the opportunity to see one.