Carburangeli cave
All the places 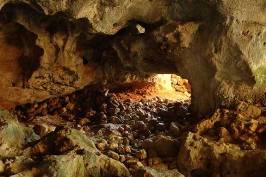 The area is protected for its worthy and naturalistic cave. The cavity is found in the carbonate formations of the Quaternario (about 1,800,000 years ago), carved by the erosion of the sea. The formation of the cave is linked to strong variations in the sea level that are caused by climate change that in that period affected Sicily. The repeated displacements of the shoreline have led to the drowning and subsequent re-emergence of the coastal areas, triggering a major geomorphological process that is responsible, in part, for the current shape of the island.

Found here were numerous fossil remains of animals that once roamed Sicily, but also objects used by prehistoric man from the upper Paleolithic and Bronze Age, the proof being a visible charcoal drawing depicting a wizard (figure apotropaic).

In the front area, many fragments of Roman pottery have been recovered.

map
Place of great charme. Near the sea of Carini was the lair of many dwarf elephants that lived in Sicily. But there were ‘colleagues’ of the elephants, too, such as hippos,...
map
Grotta Za Minica This is another Sicilian cave that was inhabited by Pleistocene animals (elephants, cattle, deer, hippos…) and then by man, where instead of animal bones they left flint tools....
map
Site of great beauty. The headland, where the ruins of a 15th century tower emerges consist of calcareous Mesozoic age dating about 200 millions years ago, which settled on the seabed in an...
This site uses cookies. By continuing to browse the site, you are agreeing to our use of cookies.
Ok Find out more