Selinunte
All the places 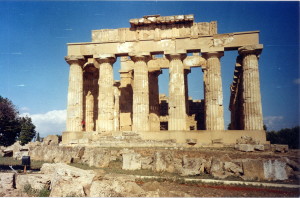 Another powerful city of the Greek period for which there are still many remains, overlooks the acropolis and faces the African sea. Selinunte was settled by the Greeks in the 7th century BC and was forever in conflict with nearby Segesta.
The name means “parsley” (from selinon, in Greek) because in this area it grew (and grows) copiously. The archeological park, 40 hectares, is characterized by a series of hills overlooking the sea and across from the river Selinos. It is here that the remains of a very powerful city are found.  A shuttle-bus was recently added to facilitate visiting since it can be difficult, especially in this area’s summer heat.

The tour starts with the eastern hill (on the map it’s on the right) where there are ruins of many temples.  Certainly worth highlighting is Temple E (photo, on the map it is the biggest temple on the right), the best preserved.  Probably dedicated to Hera, it measured 70.18 x 27.65 m, and was in proportionate and symmetrical harmony. It is classified as one of the best examples of Doric architecture in the world.

The Selinunte’s metopes (decorative and rectangular architectural element that fills the space between two triglyphs in a Doric frieze), are exceptional stone sculptures famous all over the world: carved from soft tufa limestone, they depict “Athena and Enceladus”, “Apollo and Daphne”, “Zeus and Hera”, “Hercules and Antiope”, and Artemis and Actaeon”. These are all preserved in the Regional Archeological Museum in Palermo.

Standing amidst the rubble and with the splendid panoramas of the coastline and the beautiful sea, one can easily imagine what it was like with ships in the water. We move to the Acropolis (in the center of the map, between the two lakes), preceded by a beautiful tract of wall and hints of doors. We are inside the city, walking on two wide streets that intersect one another. We feel catapulted back to the past with remains of buildings of various nature on all sides.

The majestic splendor of these ancient ruins glorify Selinunte. Among the numerous temples to be admired on the acropolis, certainly worth mentioning is the Temple of Apollo (Temple C) of the dimension, 63 meters by 24. Also in this case, the metopes are preserved and on display in the museum in Palermo, leaving the viewer speechless. You can see: Apollo with the chariot, Hercules and Cercopi, Perseus slaying Medusa.

Opposite the sea, therefore facing north, a path leads from the buildings of the acropolis to the town center of Selinunte (the highest part in the center of the map), on the hill of Manuzza where the Agorà (gathering place) had been. Here there are also a few ruins of what was supposed to be an imposing public building in tufa limestone.

Situating yourself always to the acropolis, now procede towards the west. You will arrive at the top of the Selinon river, at the lowest part of Selinunte, where one finds other impressive ruins belonging to a classic sanctuary outside of the wall: The Sanctuary of Demetra Malophoros  which is accessibile through a covered  portico, with two external pediments: here there were two altars for sacrifices, a well and the temple of the Malophoros. Just beyond is a beautiful Antiquarium.

Selinunte was mostly built with material that was extracted from the Cave of Cusa. 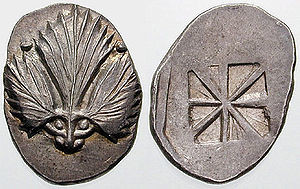 There is nothing in any museum that can describe the magnificence of Selinunte! The city was, by the way, the first to mint coins and in this photo is an example: a silver didracma from about 530 BC.

map
Within the marvelous ruins of Selinunte is the homonymous Antiquarium, near the source of the Gaggera and the Temple M. Selinunte was founded in 650 B.C. and was thus called (Selinùs, in Greek)...
map
Il museo Civico espone numerosi reperti provenienti dalla vicina Selinunte, dai bronzi alle ceramiche. Grande vanto del museo è certamente l’Efebo di Selinunte, tutt’oggi uno dei ritrovamenti...
map
The reserve extends between Marinella di Selinunte and the promontory of Porto Palo. It includes the terminal stretch of the Belice river and the characteristic dunes (small reliefs of sand carried...
This site uses cookies. By continuing to browse the site, you are agreeing to our use of cookies.
Ok Find out more