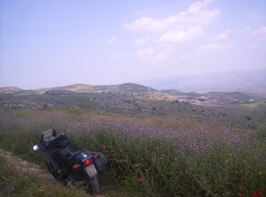 Immersed in the fields of wheat on the plain of Catania is a valley, silent and almost surreal. In the valley, one arrives after having crossed many ports of entry (the highest points of a valley) to an area riddled with tombs and grottoes carved in rock. The valley is dominated by a medieval castle, with great circular towers outstanding on these fields of grain. 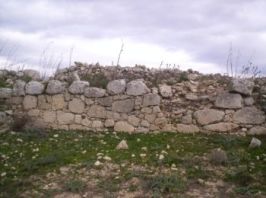 One can see several dwellings carved in rock and there is a stretch of wall (photo) amazingly still standing.

On the ground is a museum with fragments from the past. On the southern part of the site, under the highest point there is a building with a typical square window cut into rock that dominates the valley of Margi. There is a series of very interesting rooms carved out of rock, that were probably used for defense (look outs) or, according to some, Byzantine dwellings (5th – 9th centuries AD).

Located to the west and east of the settlement, there are two sacred areas, perhaps associated with two sanctuaries. Even in the middle of the town, there are very big stone blocks visible which might have belonged to a sacred building. 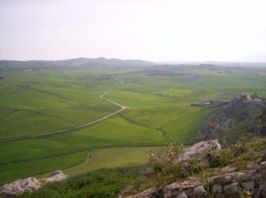 It was probably an agro-commercial area since, looking to the south west, one can still observe the remains of big lava stone mills.

The necropolis lies mainly to the east and consists of tombs with chambers and caves, both carved in rock.

Today, everything here is in the hands of the farmers of Sicily.

map
The area of Caltagirone is truly very rich in archeology, having had a human presence dating back thousands of years ago.   The Mountain is located north of Caltagirone and includes a...
map
Siamo a Caltagirone cittadina famosa nel mondo da oltre mille anni, per la sua bellissima produzione di ceramica. Interessantissimo museo che illustra attraverso la raccolta di manufatti provenienti...
map
Housed in the eighteenth-century Interlandi masseria, in one of the most evocative places of the whole Sicily, the museum stand on the slopes of the homonymous archaeological area. Among prickly pears...
This site uses cookies. By continuing to browse the site, you are agreeing to our use of cookies.
Ok Find out more