Naxos
All the places 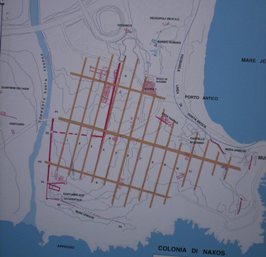 Naxos is the first place where the Greeks landed, we think around 734 BC, and they  arrived there “pushed by the winds,” according to Ephorus. Its founder was Teocle, and this marked the beginning of the Sicilian epoch of the Greeks. They constructed a city, made completely of lava stone, that they referred to with the same name as the city they left behind in the motherland, Naxos.

Incidently, Naxos, Greek Island of  the Cyclades, was where, according to legend, Dionysus met Ariadne, abandoned by Theseus, and married her. But much time has passed since the sailors of 1,000,000 days ago.
Once they landed, they were wildly destructive and took “possession” of the Sicilian women creating a new breed: the Siceliot (Greek father and Sicilian mother). A little while later (5th century BC) they would become the most powerful descendants in the Mediterranean with Syracuse the queen and capital.

Following this, in 403 BC, Naxos was destroyed by Dionysus I of Syracuse, who enslaved the inhabitants and punished them for siding with the Athenians over Syracuse.
It was the beginning of their political decline advantaging Taormina, which was settled in 358 BC by Andromaco, father of the historian Timaeus.
Today you can see the ruins of Naxos.  Stroll through the streets, all cut at right angles, in the typical Hippodamian style. There are several blocks where you can still see the ruins of houses, some quite large with several rooms, open-air courtyards with cisterns and bathrooms.

Of great value are the beautiful walls made of lava stone (photo), which have withstood many attacks. The weather has made them even stronger by cementing the huge blocks together with a typical Greek glue: humus, the earth itself that was growing between the stones. A whole micro universe made of plants and animals lives in this mineral–rich humus and inextricably bonds these megaliths.

We challenge you today to try to scratch the surface of this hard stone made of Etna. 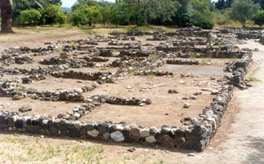 Near the south-west, there is an interesting sacred area (photo) and close to it the ruins of two ovens used from the time of the Greeks to the Byzantines. Behind the walls are the remains of a great temple from the 6th century BC, intentionally built with its entrance facing east (towards the motherland of Greece), that rests on top of an older shrine.

Naxos grew in power and around the 6th century BC minted coins in silver, the most ancient coins of Sicily with the head of Dionysus on one side and a bunch of grapes on the other (later, during the classical age, this was replaced by a Silenus, an agricultural deity, portrayed naked and relaxed, drinking wine).
Where once the old Santa Venera river flowed, adjacent to that sacred area, today there is just a small stream. The site was inhabited until Byzantine times (8th century AD). Also worth seeing is the very interesting Antiquarium , in which you can see a lot of Naxos finds.