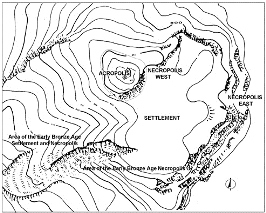 Polizello’s town occupies the plateau of a mountain 877 meters high.
In a spectacular setting, where the interior of Sicily is ever enhanced by her green hills, is the seat of this very important city of the past. The settlement, built on different levels, using a series of large terraces, opens to the steep slopes of the mountain.
Here, the first inhabitants were Sicilians that had recently left the club. We are in the Bronze Age (2000 BC) and they lived in circular huts that had roofs made of branches or straw and a supporting structure of stone with wooden frames.

Reaching the summit, what surely strikes you (including the landscape, of course), are some circular enclosures: sacred, chapels (photo), of the 8th – 6th century BC), representing the places of cult worship and the thesauroi, where they kept votive offerings (a sort cash box for times of war). They seem to envelop the visitors in its circular form and its platforms.
On the eastern side of the Acropolis, behind the wall of Temenos, a large residential building has been identified, consisting of several rooms, with single pitched roof tiles, dating from the late 5th century BC and called the House of Temenos. 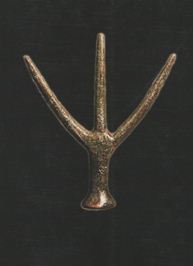 The eastern slope of Polizello is marked by a burial cave with tombs (2000 BC), a rectangular chamber, without dromos, with multiple burials in the family style.
Polizello has given history magnificent finds that are preserved in various museums in Sicily. Perhaps the symbol of Polizello is her most beautiful and inexplicable trident bronze votive (photo) that is found in the museum in Caltanisetta. Polizello owes its name to the brother of the best known tyrants of Siracuse, Hiero and Gelon.

map
Raffe The photo shows the view from atop Raffe. The only building that one sees is that of the archeological area. For the rest, here is the Sicilian hinterland. Here is the green of the fields of...
map
Serre di Villalba A beautiful place, in the central crossroads of Sicily. There is a long rocky ridge, a real jagged corridor of little hills that has its apex in the south, where you find Cozzo...
map
Monte Conca (Naturalistic Reserve) Monte Conca it’s a limestone plateau characterized by a geologycal formation of 5 millions of years ago.   It’s crossed by the river Gallo...