Rocca of Cefalù
All the places 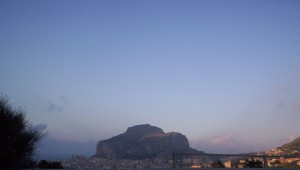 Cefalù, that in Greek means all head, owes its name to the rock fortress that dominates the village (photo) which has a similar shape, that of a head. The beautiful village is rich in archeological evidence, especially along the rock, whose path rises in a real tribute to landscape and history.

One can easily access  it from the center of Cefalù, across the picturesque alley of the Saracens. The climb begins. Look around. Often on this climb you can see the peregrine falcon, a resident on this enormous mass that seems to grow out of the sea. Once through the entrance, you get to the heart of the Rocca. Continually climbing, with stretches of the Mediterranean in view, it is a succession of panoramas that you will never forget.

One walks among walls, ruins , cisterns, and ovens from another era. At a certain point on the walk, about half way up on the north side, almost like magic and like a castle in the desert, the Temple of Diana appears (photo). There are megaliths and small mysterious structures, dates unknown. It is probably from the 9th century BC and was no doubt used for cult worship, as is suggested by the presence of a cistern, clearly sacred, on the inside. But, it was a long time ago and who knows who it belonged to ?
It could have been a temporary structure. Time machine will erase this doubt ! 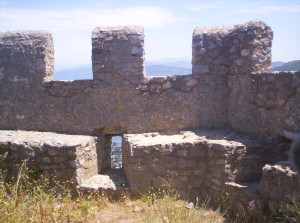 Continuing the ascent with the battered walls making it almost impenetrable, one arrives at the top to the ruins of an impressive medievel castle (1200) whose rooms you can see perfectly.

Apart from the Rocca, Cefalù contains something from all the ages, from medieval streets, to ancient walls and doors.
Don’t forget to take a look to the medieval public wash (lavatoio).