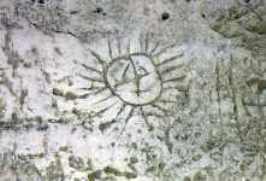 This area is rich in archeological evidence, it was one of the bastions of Sicily at one time. Probably the most interesting complex is the Grotte di Marineo, that is made up of a series of cave dwellings from the Neolithic period (5000 yeas ago) where one finds some graffiti made by sun rays (photo).  In addition to the grottoes, the mountain is salso rich in shells of the Messinian era (5,000,000 years ago).  On the wall in the back of one grotto, up and on the left, one can see the mouth of a spring. On the worn dirt floor, traces of canals are visible and these were possibly for ritual use (a sun-god cult?) 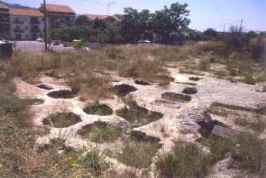 Another interesting discovery is at Poggio dei Santi, in the district of Alia. It is accessible from the road connecting Vizzini-Buccheri. The hill is 630 m high and dominates the valley of the river Amerillo.
Here on the south side is a spectacular complex of caves with rooms carved into rock, a few used as tombs (the so called beautiful canopy).  Inside are still visible traces of painted panels with dark backgrounds. A little path, built on the hillside and reinforced with dry walls, is the only access to the site with diverse terraces and grottoes, in fact.
The entire are of Licodia Eubea is made interesting by a number of necropoli from various time periods: Vigna della Signora (Sicelioti, 6th century BC, photo), with multiple burials, these had a minimum of three to a maximum of seven subjects from the same family. Of particular note is the presence of the remains of a horse buried with his master, a rare occurrence.

Necropoli di Fossa Quadara Located on a high plateau overlooking, on it’s north side, the artificial lake of Licodia Eubea, it is about 5 kilometers from the town. This necropolis has yielded beautiful artifacts that are now in many Sicilian museums.

map
River of historic importance as it served as a way of communication between the coast and the hinterland, the ancient inhabitants of Sicily. Starting from the meeting of the Amerillo and the Vizzini...
map
Archeological mountain, at 730 meters above sea level, a center of the ancient Siculi people dating to (X a.C. ?) that today appears well covered by reforestation. On the slpoes of the mountain you...
map
Monte Catalfaro The “rock mouse” (Monte Catalfaro in Arabic) is a beautiful rocky plateau with the plain of Catania below. Full of orange groves now, the plain were once crossed by a lush...
This site uses cookies. By continuing to browse the site, you are agreeing to our use of cookies.
Ok Find out more